(the king) He asked them, “The man who came to meet you and told you these things, what kind of man was he?” “He was a hairy man,” they answered him, “with a leather belt around his waist.”  He said, ” It was Elijah from Tishbe.” 2 Kings 1

4 John’s clothes were made of camel’s hair, and he had a leather belt around his waist. His food was locusts and wild honey. – Matthew 3:4

2.  “Man of God”  used the first two times by the commanders of fifty was done sarcastically.  Man of God is a representative of God to us…calls for the same respect one would give an all-powerful God.  The lack of respect was what was punished…with death!  Study of the Old Testament highlights God’s disgust with arrogance and smugness.  Disrespect brought judgement many times.  Something to be very wary of.

3.  God’s word is powerful…it accomplishes what it sets out to do.  This is done with or without humanity’s belief.  We can participate in it or be at its effect.  Sobering.

Israel belongs to God.  When they stray he will not ignore it but take steps to bring them back into alignment with Him and His ways.

Our country has strong foundations in the Judeo-Christian beliefs.  It was founded by deeply religious people whose faith in God led them here to give him honor and practice His ways.  Their primary concern was to have a place where they could do so without hindrance or persecution for their faith. As we continue, as a nation, to honor Him we are blessed.  As we leave His ways and disrespect Him we are faced with the consequences not much different than that faced by the Hebrew nation.

Our history bears the truth that those who serve the Lord bring blessing.  Those who disrespect Him and His commands, bring cursing. We are warned.  What course of action will we take?  Our prayers can make the difference.

Then I looked up and saw four horns.  I asked the angel who was speaking to me, “What are these?” He answered, “These are the horns that scattered J’hudah, Isra’el and Yerushalayim.”

Next Adonai showed me four artisans.  I asked, “What are these coming to do?”  He said, “Those horns that scattered Y’hudah so completely that no one could even raise his head–well, these men have come to terrify them, to overthrow the nations that raised their horns against the land of Y’hudah to scatter it.” 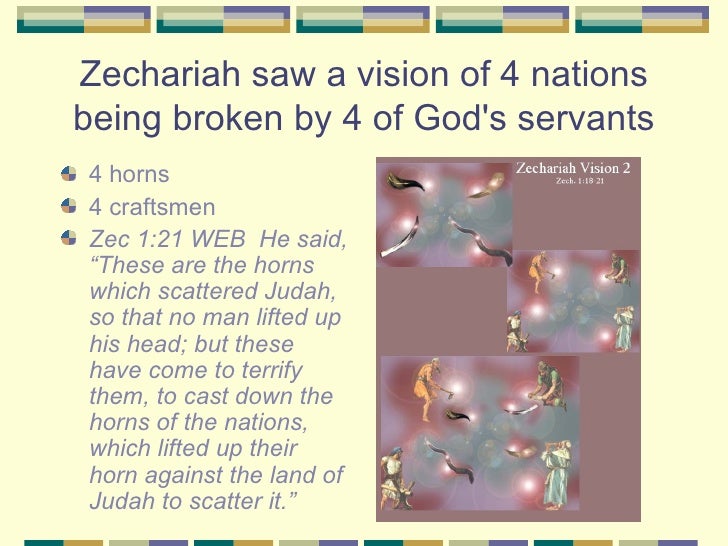 There’s more to this chapter, but this portion spoke to me and I wish to share those thoughts.  The explanation in the study Bible states the horns are the nations who came against the Hebrews and defeated them, scattered them as judgment from God because the Hebrews turned from God to other gods.  The artisans are agents sent by God to defeat those nations and therefore allow God to rebuild his city, Yerushalayim. Other writers see the craftsmen as agents who also assist in the rebuilding of the Hebrew nation.

Reflections on this passage noted that those used by God to punish his people who have turned away from him are in turn destroyed for coming against his people in such a way.  It is fearful to be used by God to discipline another.  That same discipline may come back around on the one who was used.  Beware of pride which can falsely elevate one’s sense of being more than one actually is.  A key phrase in scripture is to “walk humbly with your God.”* It is tempting to become smug at another’s correction.  No arrogance will go unpunished.

[Proverbs 17:5 NKJV] 5 He who mocks the poor reproaches his Maker; He who is glad at calamity will not go unpunished.  (emphasis mine)

Note also, those used here in this passage were not ‘believers’ but outside the family of Hebrews.  Judgment against God’s people, his ‘church’ may come from outside the family of believers; it will still carry the curse of God, ‘anyone who injures you injures the very pupil of my eye.’  Whether or not the judgment comes is not based upon belief.  God’s word does not return void, or empty, it does accomplish what it sets out to do.

When one is used by God to correct another it would be wise to remember to do so humbly; not in weakness but with the knowledge that the correction comes through them not from them; it comes from God…this might help those who often say to ‘correct with love,’ since our definitions of love have been corrupted.

*[Micah 6:8 NKJV] 8 He has shown you, O man, what [is] good; And what does the LORD require of you But to do justly, To love mercy, And to walk humbly with your God? (emphasis mine)

Correction has an objective and that is to change direction or purpose; it also has an end goal and that is one of rebuilding something anew.  When one is going in the wrong direction, it is good to be redirected. It may protect from future harm; it may enable one to have an increase in purpose.  In this portion, the horns destroyed the old ways and paved the way for the craftsmen to rebuild.  Those giving correction and those receiving correction can more easily move through the process if they keep in mind the purposes of correction.

Any thoughts on this?

Have mercy on me, O God,

For my enemies are hounding me;

All day long they assault and oppress me.

Our government leaders, our religious leaders, our neighbors…all stand on both sides of this fence.  Some call for the harassment; some are at the effects of the harassment. Some call for violence; some are at the effect of the resulting violence.  Stand back and listen, read the comments, listen with open ears and read with open eyes.  What does the Lord God Almighty have to say about this?  Do some soul searching…are we truly enlightened?  Then where do we stand in this picture? Do we join in with language that is demeaning or do we answer softly, kindly, gently or not at all?

They hound me all the day long;

Truly there are many who fight against me, O Most High.

Whenever I am afraid,

I will put my trust in you.

In God whose word I praise,

In God, I trust and will not be afraid,

For what can flesh do to me?

All day long they damage my cause;

Their only thought is to do me evil.

They band together; they lie in wait;

They spy upon my footsteps;

Because they seek my life.

Shall they escape despite their wickedness?

O God, in your anger, cast down the peoples.

You have noted my lamentation;

Put my tears into your bottle;

Are they not recorded in your book?

Whenever I call upon you, my enemies will be put to flight;

This I know, for God is on my side.

In God the Lord, whose word I praise,

In God I trust and will not be afraid,

For what can mortals do to me?

I will present to you thank offerings.

For you have rescued my soul from death, and my feet from stumbling,

That I may walk before God in the light of the living. Amen

What is your position? Where are your eyes and ears looking and listening?  Where is your understanding?  Are you in the light or functioning in the dark?  What is your fruit?  Is it encouraging and building or tearing down and hurtful?  It is time to turn the tide of evil in the land; one at a time.  Relying on the Lord God for truth, strength and wisdom.  By your love they will know you.  That is the love of God and neighbor.  Not love as our society sees it today.  It is time to do some soul searching and praying in the Father’s will and wisdom.